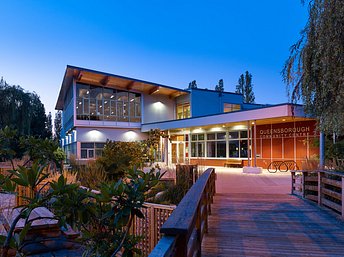 The Queensborough Special Programs Committee and the Queensborough Community Centre have a longstanding relationship that has lasted for several decades and generations.  Formed in 1979, the QCC has always been QSPC's hub.  This relationship has grown a recognisable community culture in Queensborough, with many valuable events and projects to serve the public.  One such event included the Fall Fair, which was an opportunity for the community to gather and celebrate the success of the Summer, whether it was bountiful gardens, wonderful food or new friendships.

Today, the partnership between the QSPC and QCC is just as important and thriving, as the two work in tandem to serve the community of Queensborough.  The QCC supports QSPC events and projects through in kind support, including space to carry out our

activities and staff assistance to help support those initiatives.  Both organizations mutually support the initiatives of the other, offering Queensborough residence  a culturally and socially rich community in which to play, learn and grow!